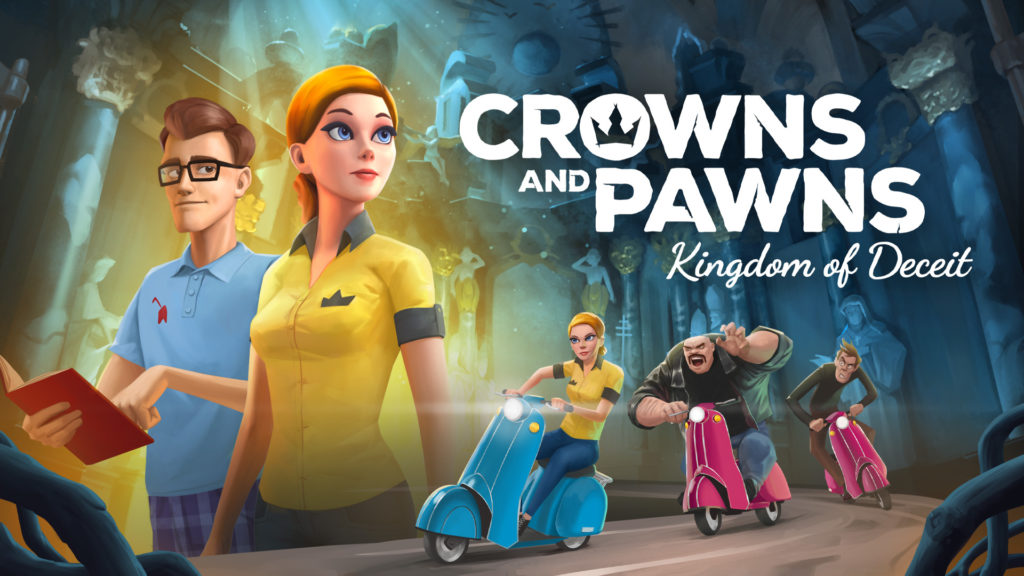 Headed up by the art director from Broken Sword 2.5 and featuring a talented voice cast that have starred in the likes of The Monkey Island series, Day of the Tentacle, the upcoming God of War: Ragnarok, The Wolf Among Us and more, Crowns and Pawns: Kingdom of Deceit takes you on a thrilling trip across beautifully rendered locations in Eastern Europe imbued with romanticism and conspiratorial intrigue. What begins as a personal story about Milda traveling to the home of her deceased Lithuanian grandfather after receiving a mysterious letter referencing a family secret, soon unfurls into a rich web of enigmatic danger that draws on the rich and underexplored history of the region. Milda’s family secret goes deeper than she ever imagined, leading her to investigate a lost relic, Lithuania’s most legendary royal and the clandestine machinations of the KGB during the Soviet era.

Praised by Broken Sword creator Charles Cecil for its “beautiful graphics” and “fascinating story” and given the “I dig it” stamp of approval by The Curse of Monkey Island artist Bill Tiller, you can get a look at what Crowns and Pawns: Kingdom of Deceit has to offer in the new trailer:

From enigmatic anonymous messages, to logic-testing conundrums, to classic item puzzles, Crowns and Pawns: Kingdom of Deceit is packed with a variety of satisfying mysteries and puzzles for you to solve. For some of them you might even have to change Milda’s outfit, from clothes to hairstyle. Of course, you can also just tweak her look for fun! As you explore the game’s rich hand-painted scenes, you’ll meet a host of fun and eccentric characters, all with fully voiced dialogue, further building a rich world that’s a pleasure to inhabit.

The role of Milda is being played by Erin Yvette, who is due to appear in the upcoming God of War: Ragnarok, and also has a long list of impressive credits for roles in The Wolf Among Us, Oxenfree, The Walking Dead and Batman: The Telltale Series. She is jointed by Matthew Curtis, who has appeared in Unforeseen Incidents, The Hand of Glory and Smite, as well as adventure game veteran Denny Delk, who you might recognise as Murray in the new Return To Monkey Island, alongside his other roles in Day of the Tentacle, Sam and Max Hit The Road and a host of Star Wars titles.

“We are so happy that Crowns and Pawns: Kingdom of Deceit is now available to play,” said game director Šarūnas Ledas. “We have a deep love of adventure games and the incredible experiences they have delivered over the years, so it’s long been a dream of ours to create a brand new adventure that draws on the best of the classics we’ve enjoyed. We hope you like it!”