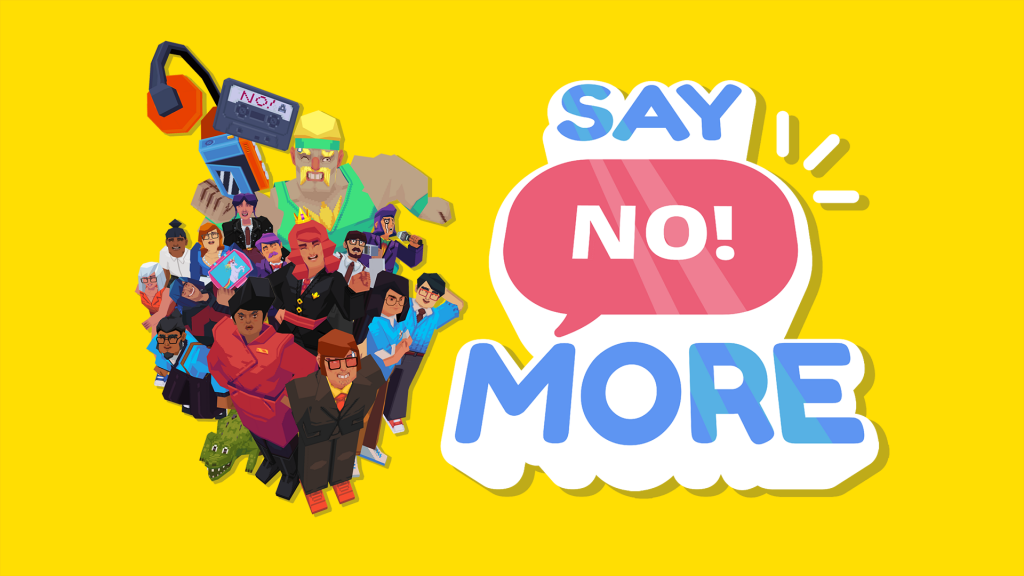 Say “NO!” to waiting until its April 9th release to download it!

Say No! More is the world’s first NPG (NO!-Playing Game), a brand new experience coming straight from the minds of Studio Fizbin. In a world where everyone sticks to the status quo of saying “YES”, create your own custom character and take on the role of an intern on a mission to change the world with the positive power of “NO!”. With this new power nothing will get in your way as you shout “NO!” at any absurd requests fired at you.

Using simple controls designed for anyone to pick up and play, start your working life through a predetermined path in a quirky office environment. As well as shouting NO! in your chosen language, use your NO! different emotional states to send them reeling. Confuse people with different actions to let their guard down, then charge up your NO! for an even greater effect on unsuspecting colleagues.

Touching on timeless and modern issues such as social etiquette, friendship and workplace standards, this hilarious adventure has tender depth. It’s all wrapped up in a fun late 90s video game style, complete with chunky, colourful visuals, comical animations and jazzy music that you’ll struggle to say “NO!” to.

“Imagine you’ve just had a hard day at work and all you want to do is play Say No! More, but what’s this? You have to wait for it to download first? I say NO! to that” said Marius Winter, Game Director at Studio Fizbin. “Pre-order it now so you can install it ahead of time and jump right into the wish fulfillment fantasy of being the world’s most empowering intern!”

“Say No! More is a clever inversion of typical video game tropes in which your stalwart hero takes on all manner of tasks to help random NPCs with their troubles,” said Tyrone Walcott, Product Manager at Thunderful Publishing. “In Say No! More you’re excelling through the use of boundaries and self respect. It’s a timeless message that you needn’t respond in the affirmative to be a real hero.”